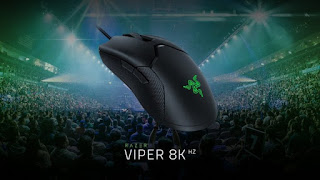 The new generation Razer Viper was first announced two years ago. It’s got a number of variants since, and now a new one called the Razer Viper 8KHz joins the list.
So what’s the deal with the new variant? Mainly one thing, and that is the 8000Hz polling rate. DPI is also pushed up a little, from 16000 to 20000, but that’s far less significant. Beyond that, it sports the familiar ambidextrous design and optical switches. And it remains very lightweight, at 71g.
If you’re unfamiliar with the term, polling rate refers to the frequency at which a peripheral sends data to your PC. Razer was one of the first to introduce the now industry standard 1000Hz polling rate, which the company calls Ultrapolling. This also means an input delay of 1ms. A polling rate of 8000Hz, or what the company calls Hyperpolling, cuts it down to 0.125ms.

In theory, this means better response time, though it would be amazing if anyone could tell the difference between a 1ms input delay and one of 0.125ms. Also, this tech on the Razer Viper 8KHz is currently only available in wired form.

If you’re interested, the Razer Viper 8KHz is already available on the company’s online store. And it comes with a price tag of RM399.