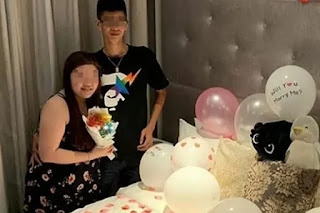 Li Heng Xun, 25, and Evon Yee, 26, are accused of leaving the newborn in a recycling bin during a trip to the island two years ago. But Taiwan can have trouble pressing extradition requests as many countries, especially those with close links to China, don’t treat it as a sovereign nation.A Singaporean couple who allegedly dumped a newborn baby in the trash during a trip to Taiwan two years ago have been placed on the island’s wanted list on suspicion of murder, Taiwanese prosecutors said on Wednesday.The couple allegedly left the baby girl with placenta and umbilical cord still attached in a recycling bin in February 2019.A recycling company employee later found the infant’s body wrapped in a garbage bag.Prosecutors said that Li Heng Xun, 25, and Evon Yee, 26, are now both being sought for murder and a charge of abandonment.But Taiwan sometimes faces difficulties in pressing extradition requests because many countries do not treat it as a sovereign nation, especially those with close links to China.On Wednesday, Taiwan’s Apple Daily reported that Singaporean authorities had refused multiple requests to provide the couple’s DNA samples, citing “inconvenience due to the coronavirus pandemic”.The case bears some resemblance to that of a Hong Kong man who is wanted in Taiwan for the murder of his pregnant girlfriend.Chan Tong-kai has admitted to killing his girlfriend in a Taipei hotel room during a Valentine’s holiday to the city in February 2018.Currently in Hong Kong, he has expressed willingness to surrender himself.But he remains free as Taiwan and Hong Kong argue over the handling of his case.That murder inadvertently led to the huge democracy protests that swept through Hong Kong in 2019 over a now-scrapped bill to allow extraditions to mainland China, which regards Taiwan as part of its territory.Taiwanese media reported that the Singaporean couple are believed to have dumped the girl’s body seven days after they arrived in Taiwan.They then flew back to Singapore the same day.Local media have aired CCTV footage of a man carrying a black plastic bag walking in an alley and a pregnant woman in a convenience store, identifying them as the two Singaporeans.Police reportedly found blood trace in the bathroom of their hotel room that matched the baby’s.
at February 17, 2021
Email ThisBlogThis!Share to TwitterShare to FacebookShare to Pinterest
Labels: News