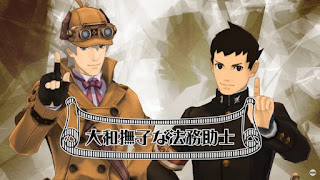 If you like the Ace Attorney series and wished more of its spinoffs were available on non-Nintendo platfroms, there’s good news. An upcoming compilation, called The Great Ace Attorney Chronicles, will be making its way to PC and PS4. This is, of course, in addition to the Nintendo Switch.

The game appeared on the Taiwan Digital Game Rating Committee. It was listed alongside a Switch port of Tales from the Borderlands, and a PS5 version of Genshin Impact, among other things.

The plot of The Great Ace Attorney series centres around Naruhodo Ryunosuke, an ancestor to Naruhodo Ryuichi, or Phoenix Wright. Set in the late 1800s, it sees Ryunosuke traveling to England, and meets up with Sherlock Holmes.

Hopefully, this leads to a localised version of Ace Attorney Investigations 2 as well. The sequel of the spinoff starring Miles Edgeworth is another game in the franchise that never left its home country, even when the first game did.