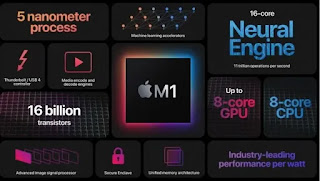 While the current cryptocurrency boom has given some individuals an unexpected windfall, the resurgence has also led to GPU miners grabbing every graphics cards and NVIDIA GeForce RTX 30 series laptop they can from an already starving global supply.

Of course, there are other ways to mine for cryptocurrency – specifically, Ethereum – and with that said, it should come as no surprise that Apple’s M1 chip was recently confirmed as a “potential” mining option.

The M1’s mining potential as an Ethereum miner was discovered by Yifan Gu, a software engineer for Zensors, through a MacBook Air, and you would expect, there is a bit of fiddling about with some software. For the record, this isn’t the first time the M1 has been used for mining; prior to this, developers at XMRig had tried to mine Monero with it.

The end results of the experiment are…well, less than ideal. At best, the M1 is also able to mine Ethereum at a rate of 2MH/s at most. In terms of monetary gain, that’s approximately RM0.57 per day. Bear in mind, the mining procedure is only using the M1’s GPU, between 17W and 20W.

Needless to say, the M1’s mining performance is abysmal, especially when you compare it to the prowess of other full-fledged GPUs from NVIDIA’s GeForce RTX 30 series and newly announced CMPs, as well AMD’s old and currently existing GPUs.

Once again, this was all just an experiment and we highly doubt anyone would recommend turning the Apple M1 into a daily GPU miner.