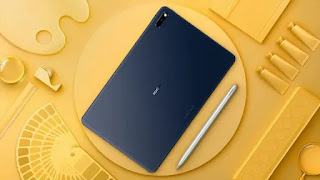 Following its recent revelation, Huawei today has officially released the MatePad 10.4 tablet with refreshed specifications in Malaysia. As you may recall from our previous report, the tablet is almost identical to the MatePad Wi-Fi that was released in our market last May.
The similarities between both models include the 10.4-inch 2000 x 1200 IPS display which also supports the Huawei M-Pencil stylus. Huawei has also retained the 8MP rear and front cameras as well as Harman Kardon-tuned speakers and a 7250mAh battery. 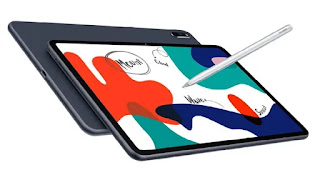 Additionally, the refreshed model also still features 4GB of RAM but the previous Kirin 810 processor has now been replaced with a Kirin 820 processor which carries a slight boost in term of firepower. At the same time, it also carries twice the amount of internal storage at 128GB and supports Wi-Fi 6.

True to our prediction, the MatePad 10.4 128GB is priced at RM 1,499 which is not far off from its older Kirin 810-based twin. At the moment, Huawei Malaysia is also offering a free MatePad Bluetooth Keyboard which also acts as a case for the tablet, with each purchase of MatePad 10.4 while stocks last.
at March 21, 2021
Email ThisBlogThis!Share to TwitterShare to FacebookShare to Pinterest
Labels: 10.4, 128GB, for, Huawei, in, Kirin820, Malaysia, MatePad, RM1499, StorageLands