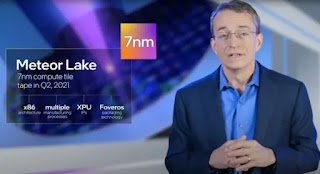 As to when we can see Meteor Lake CPUs, Intel says that the earliest 7nm architecture will be made available to the masses is sometime in 2023, but the tape-in for it is set to be completed within the second quarter of this year. In the mean time, the chipmaker already has plans to launch Raptor Lake, its 13th generation CPU lineup and successor to the upcoming 12th generation Alder Lake lineup, before the arrival of what is clearly set to be its 14th generation of CPUs.

While details for Meteor Lake are scarce, we can at least draw upon certain expectations based on what is expected to the debut with Alder Lake; as per earlier reports, the new lineup is expected to be one of the first to support the PCIe 5.0 interface, as well as the upcoming DDR5 memory standard. Further, it is also the first CPU to truly be based on Intel’s 10nm Enhanced SuperFIN process node.
at March 25, 2021
Email ThisBlogThis!Share to TwitterShare to FacebookShare to Pinterest
Labels: 2023, Architecture, Begins, Confirmed, CPU, in, Intel7nm, Lake, Launch, Meteor, Quarter, Second, Tape-In