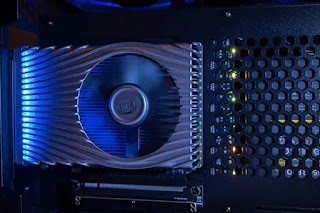 Intel recently confirmed the specifications of its Xe DG2 GPUs by furnishing its official, repository website with new details about its discrete graphics for laptops. According to Videocardz, details from the repository is usually restricted to individuals and entities that are under NDA, yet for some reason, the information was easily found online.
That aside, the repository initially lists down a total of five SKUs for the Xe DG2. Firstly, the variants will come with 512 Execution Units (EU), 384EU, and 128EU. Each EU will have eight shading units, so the total number of shaders for the 512EU comes up to 4096 shading units, or ALUs. The odd thing is that the same source also lists down two other EU variants, which are 256EU and 96EU.

Additionally, there is reason to believe that Intel is preparing four memory configurations for the Xe DG2: 4GB, 6GB, 8GB, and 16GB, the latter obviously being the flagship SKU. Moreover, the laptop GPUs are expected to support memory speeds between 14Gbps and 18Gbps, which is also running on the GDDR6 memory format. As promised earlier by Intel.

A lot of this information seems to align with earlier reports of the Xe DG2; back in January this year, leaks suggested that one of Intel’s upcoming Xe-based laptop GPU would come with 8GB GDDR6 graphics memory, as well as 512EU. Moreover, the GPU was supposed to be paired with Intel’s Tiger Lake-H series, which is the chipmaker’s high performance lineup of mobile CPUs.

As for when we can expect to see this GPUs, it is rumoured that we could see them sometime during the second quarter of this year. Intel has yet to make an official announcement, though, so take this bit of news with a grain of salt.

at March 30, 2021
Email ThisBlogThis!Share to TwitterShare to FacebookShare to Pinterest
Labels: 16GGDDR6, 512EU, and, Confirms, for, GPU, have, Intel, Specs, to, up, will, XeDG2