Malaysian fintech company Revenue Monster is integrating its core service and hence its F&B merchants into the Alipay platform through a so-called mini program. This means more reach and more potential revenue for the merchants as well as a greater array of choices for Alipay users.
Through the mini program, Revenue Monster’s core service – called à la carte – will be  integrated directly into the Alipay app. à la carte essentially helps businesses set up their own online store that’s capable of handling contactless in-store ordering, delivery, comprehensive payments (like e-wallets) and more.

In short, it’s a digitalisation tool. à la carte was apparently launched in early 2020 during the first MCO and serves prominent merchants such as Sushi King, Kenny Rogers Roasters and Dragon-I. 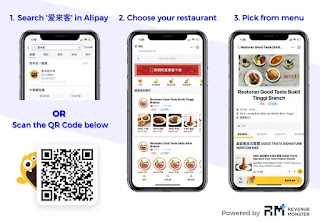 “With the Alipay mini program, we hope to increase our merchant base whilst also bringing more value to more than 6,000 merchants on the Revenue Monster platform by extending their digital reach to new customer segments,” said Revenue Monster CEO Amanda Chin.

The company claims to offer the “lowest platform fees” at 18% for merchants who join the mini program. As an additional benefit to merchants, from now until 31 May 2021, the company said that merchants who sign up for a minimum of one year will also receive one payment terminal for free.

In addition to its participation in the Alipay mini program, Revenue Monster said it plans to further expand its base and bring its service to other platforms this year.

at March 30, 2021
Email ThisBlogThis!Share to TwitterShare to FacebookShare to Pinterest
Labels: Alipay, Businesses, Expand, F&B, Local, Monster, of, Partners, Reach, Revenue, to, With