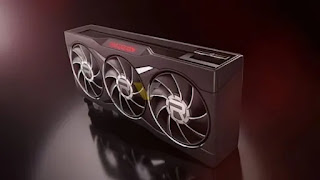 AMD very recently launched a Midnight Black Variant of its Radeon RX 6800XT graphics card. As its name suggests, the new colour option sees the card enveloped in a nearly all-black motif, complete with it red and silver accents.
Evidence of the card’s existence was made known via special notice to members of AMD’s Red Team. Apart from the different colour scheme, however, everything else about the card seems to remain unchanged. Like the standard 6800XT, its Navi 21 XT GPU is still based on the RDNA2 architecture, has 4608 Stream Processors, is equipped with 16GB GDDR6 graphics memory, and sports the same 128MB Infinity Cache.

Price-wise, the card went up for sale not too long ago and costs the same as a standard 6800XT at US$649 (~RM2685). Sadly, the card is already out of stock, so if you’re planning on snatching a Midnight Black edition for yourself, you may be out of luck. Moreover, there’s no word from AMD if this sale is going to be a one-off affair or if it plans on restocking the card.

That said, given the nature of most special edition products, it is possible that the former scenario is applicable here.
at April 18, 2021
Email ThisBlogThis!Share to TwitterShare to FacebookShare to Pinterest
Labels: AlreadyOutOfStock, AMD, in, Launches, MidnightBlack, Radeon, RX6800XT