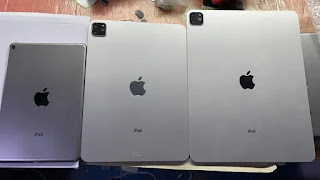 While rumours of the iPad mini 6 have been floating around, they’ve not been consistent about the tablet’s design. Some point to it having the same design it has always had, while others claim that it too will get the iPad Pro makeover. More evidence for the former have since appeared, in the form of dummy units.

Blogger and leaker Sonny Dickson shared on Twitter what looks to be dummy units of the upcoming iPad Pros and mini. And for better or worse, all three tablets look like there will be no change in their design. Not that bad a deal for the pricier tablets, but definitely a downer for the smaller sibling.

If the dummy units are representative of the actual products, then the iPad mini 6 sticks out like a sore thumb among other iPads. The vast majority of them have already adopted the design of the Pro, including the iPad Air 4. Only the base iPad and the mini are still stuck with the forehead and chin.

at April 18, 2021
Email ThisBlogThis!Share to TwitterShare to FacebookShare to Pinterest
Labels: Archaic, Be, Design, Dummy, iPadmini6, it, its, Keeping, Shows, That, Unit, will