Microsoft Goes From Submerging Servers To Flooding Them 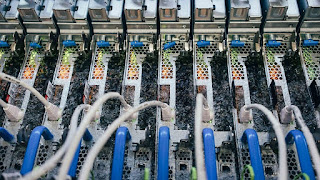 Back in September last year, Microsoft announced that its underwater data centres experiment produced good results. Now, the company is taking its liquid cooling experiments even further. Rather than submerging its servers, the company is now flooding them.
Of course, Microsoft isn’t just dumping water into its server bath tub. Instead, it uses a special type of liquid which, according to The Verge, is fluorocarbon-based. And it boils at 50 degrees Celsius, half the rate of plain water. This low boiling point makes it evaporate up to the chilled lid of the server holding tank. This cooling process reverts the vapour back to liquid, which then flows back to the servers in a loop.
Microsoft says that it is the “first cloud provider that is running two-phase immersion cooling in a production environment”. But it’s not the first ones to have thought of the technique. Oddly enough, the inspiration came from cryptocurrency miners, who have done something similar for quite awhile.

At the end of its Project Natick underwater server experiment, Microsoft says that those servers had a one-eighth failure rate compared to normal servers. The company expects that this new liquid-cooled set will have a similar performance.

at April 17, 2021
Email ThisBlogThis!Share to TwitterShare to FacebookShare to Pinterest
Labels: Flooding, from, Goes, Microsoft, Servers, Submerging, Them, to