OPPO Malaysia has revealed via its official Facebook page that the OPPO A54 smartphone has arrived and is now available for purchase. Equipped with a MediaTek Helio chipset, the device is the latest entry-level handset from the brand to be available locally.
The A54 features a decently sized 6.51-inch IPS LCD display with a resolution of 720 x 1600 px and a screen-to-body ratio of 82.6%. Also on the display is a tiny punch-hole cutout which houses a 16MP front-facing camera. As mentioned earlier, powering the phone is a Helio P35 chipset with a RAM capacity of 4GB and storage space of up to 128GB.

As usual for most entry-level offerings, the major highlight of the OPPO A54 is its large battery size which comes in at 5,000mAh. However, it only comes with 18W USB-C fast charging capability, unlike the brand’s mid-level and higher phones that feature OPPO’s SuperVOOC tech. 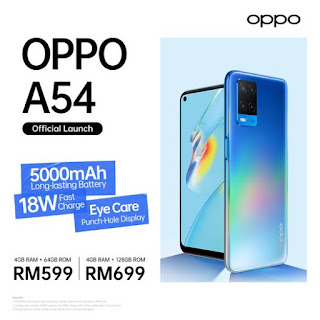 Imaging-wise, the back of the smartphone is a triple sensor camera setup which comprises of a 13MP main sensor, a 2MP macro, and a 2MP depth sensor. The camera system is capable of recording videos at 1080p at 30fps.

Other than that, it runs on Android 10 via OPPO’s ColorOS 7.2 interface and features a side mounted fingerprint scanner. Surprisingly, the phone does not come with a 3.5mm headphone jack. 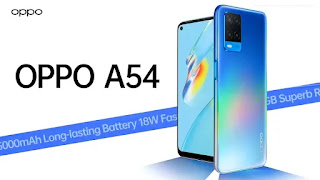 The new OPPO A54 entry-level handset is offered in black and blue colour selections and is priced at RM599 for the 4GB + 64GB configuration, while the 4GB + 128GB option comes in at RM699. Those interested can make their purchase via OPPO Malaysia’s official website.
at April 17, 2021
Email ThisBlogThis!Share to TwitterShare to FacebookShare to Pinterest
Labels: A54, Arrives, At, Entry-Level, InMalaysia, Oppo, Price, RM599, Smartphone, Starts