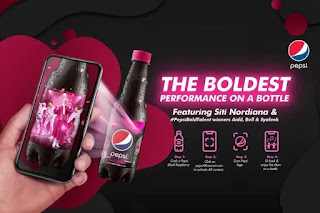 Pepsi Malaysia has announced the launch of what it claims to be the first augmented reality (AR) concert in Malaysia. This is in conjunction with the launch of the new Pepsi Black Raspberry flavoured drink. And as such, the AR concert is only accessible with a bottle of the drink.
To view the concert, you’ll first need to get a bottle of the Pepsi Black Raspberry, as mentioned. Then, you’ll need to head over to a microsite dedicated to the concert on a mobile device. It’s worth noting that if you access the site via a PC, you’ll be asked to do so via mobile anyway. From there, use your device to scan the logo on the Pepsi Black Raspberry bottle as if it were a QR code.
Considering the AR application, you’ll need the bottle constantly in the background to watch the concert. You have the option to zoom in or out to enlarge or minimise the view, but otherwise the concert plays over the bottle.

The AR concert officially started back in 16 April, but Pepsi Malaysia says that it will be ongoing for a month. It features Siti Nordiana as its main star. Also appearing are self-taught dancer Bell, freestyle footballer Aidil, and another singer Syafeek.