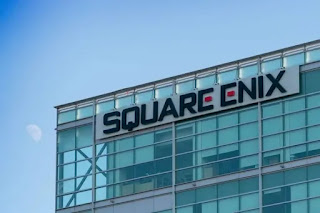 Japanese games company Square Enix has denied reports that say it is getting acquired. This comes following closely after a report that says several potential buyers were showing interest in the company.
The report initially came from a subscription news site CTFN, which was then cited by Bloomberg Japan. It quoted two bankers who were reportedly familiar with the matter. There were speculations as to whether the supposed acquisition will involve only the gaming arm of Square Enix, or the entirety of the company. For context, the company does have a manga editing house. 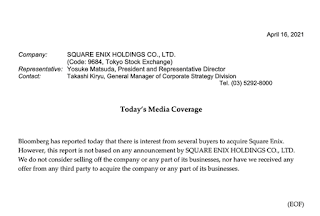 Shortly after the report got widespread attention, the company shot down the acquisition reports with an official statement. In it, the company says that not only is it not selling, but also that it has not been approached by any third parties.

Normally, the acquisition of such a major video games publisher would not have been so easily believed. But the acquisition of ZeniMax Media by Microsoft has probably changed this. With an acquisition of that scale, a company as large as Square Enix getting acquired isn’t all that unbelievable anymore. Of course, there’s also the poor performance of its Marvel’s Avengers game being another factor.

at April 20, 2021
Email ThisBlogThis!Share to TwitterShare to FacebookShare to Pinterest
Labels: Acquisition, Denies, of, Reports, SquareEnix