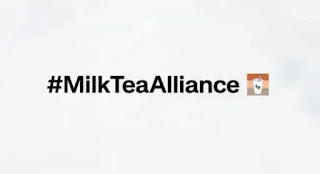 Twitter has created a special emoji for the so-called “Milk Tea Alliance” – a pro-democracy, anti-China movement that has seen traction in Hong Kong, Taiwan, Thailand, and more recently, Myanmar. Supporters of the #MilkTeaAlliance in these countries have frequently used the hashtag to protest against their respective authoritarian governments and/or China’s increasing dominance / assertiveness in the region.
Released a year after the hashtag took off, the emoji is simply a white cup set against the three different shades of a regional type of tea, the BBC said. As The Economist noted, tea is often taken neat in China – differentiating it from the milky variants popular in the other aforementioned countries.
Notably, the #MilkTeaAlliance hashtag saw a huge resurgence after the recent military coup in Myanmar. The country’s military government has since blocked Twitter, Facebook, and Instagram.

Twitter itself said it had recorded over 11 million tweets featuring the hashtag over the past year, peaking in April 2020 (its first appearance) and again in February 2021 (when the Myanmar coup happened).

This isn’t the first time that the social media platform has (at least tacitly) thrown its support towards social or political movements. It also designed special emojis for #MeToo and #BlackLivesMatter.

And it has little to lose too – Twitter has been blocked in China for years, unlike in other authoritarian countries like Russia, where it has shown some (probably grudging) cooperation with authorities. Unsurprisingly, Beijing isn’t a fan of the #MilkTeaAlliance, accusing it of consistently holding anti-China positions and being “full of biases” against the country, BBC said citing a Bloomberg report.