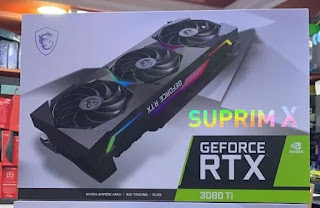 As rumours about the GeForce RTX 3080 Ti continues to pour out from NVIDIA’s rusty pipes, it appears that the card has already gone on sale in the UAE and at an eye-watering price of US$3500 (~RM14437).

The RTX 3080 TI in question is an AiB partner card from MSI, namely the SUPRIM X model. Evidence of the card’s existence was first posted on Reddit, but has since been removed. Like all MSI SUPRIM X models, this card sport a triple-fan cooling configuration with plenty of RGB accents to make your room look and feel like an EDM party.

To be fair, this isn’t the first time that an “image” of an alleged RTX 3080 Ti has made its way online, but these are the clearest and most glaring images of an actual card, to date. Another thing to note is that, while the lucky individuals in Dubai managed to purchase the card, it is unlikely that they will be able to make full use of it. 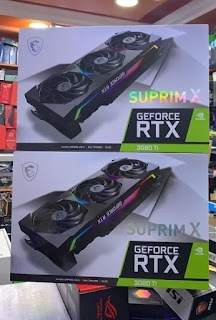 The reason we say that is because, as per NVIDIA’s protocol, the card in question still needs the official drivers to run. These drivers are only released on the official launch date of the card and in the case of the RTX 3080 Ti, recent reports point at a 2 June window.
at May 10, 2021
Email ThisBlogThis!Share to TwitterShare to FacebookShare to Pinterest
Labels: Alleged, Being, Dubai, GeForce, GeForceRTX3080Ti, in, MSI, Openly, Sold, SUPRIMX