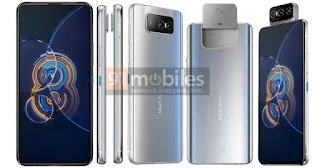 ASUS is due to announce its ZenFone 8 series of phones next week, which involves a Mini variant. But it looks like the phones have been leaked ahead of time. And it gives us a look at what exactly the company plans to launch.

91mobiles has obtained renders and specs from serial leaker Ishan Agarwal on the two devices. The larger of the two will be called the ASUS ZenFone 8 Flip. And as the name suggests, this retains the ability to use the rear cameras as the front facing ones from the previous two generations. This time, the camera setup consists of a 64MP main camera, an 8MP telephoto and a 12MP macro lens. 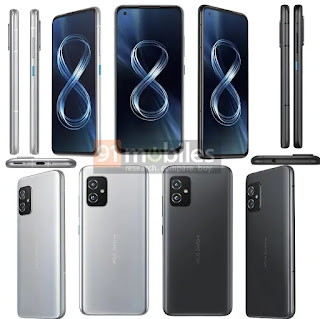 Surprisingly, the smaller device is simply known as the base ASUS ZenFone 8. The screen is a little smaller at 5.92 inches, and there’s no mention of a refresh rate, but the resolution is indeed Full HD+. Inside, it has the same Snapdragon 888 chipset and 8GB of RAM, but less storage at 128GB. The battery is also slightly smaller at 4000mAh, but it still supports 30W charging.

It sports two of the three main cameras as the larger device, dropping the 8MP telephoto shooter. And in front, it has a punch hole cutout at the top left corner, but no specs on the camera that sits inside.

The smaller ASUS ZenFone 8 naturally has its spec sheet toned down a little compared to the Flip. But it looks like it’s not sacrifices too much to keep its size smaller. As for the missing details like price and availability, we’ll still have to wait until the official announcement next week.

at May 10, 2021
Email ThisBlogThis!Share to TwitterShare to FacebookShare to Pinterest
Labels: A, Asus, Before, Launch, Leaks, Series, Week, ZenFone8