ASUS ROG Swift PG32UQX To Launch In May; Will Retail For US$3000 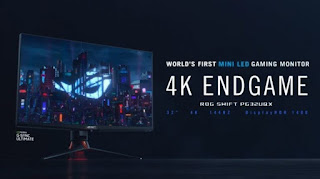 ASUS recently announced that its upcoming ROG Swift PG32UQX gaming monitor will be available for purchase starting from next month. The monitor is technically a follow-up to the PG27UQ, the primary difference between the two is its size and its new panel.

Specs-wise, the PG32UQX is a 32-inch 4K display, but more importantly, it is ASUS’ first gaming monitor to be fitted with a Mini LED IPS panel. On top of that, the display also retains the 144Hz refresh rate and NVIDIA G-SYNC Ultimate anti-screen tearing technology, as well as the Quantum Dot technology that was introduced with the PG27UQ.

There are obviously other aesthetic changes with the PG32UQX. For starters, the display has a higher peak brightness of 1400 nits, along with DisplayHDR 1400 certification. On top of that, it also sports significantly thinner bezels on the sides and top of the panel. As for the stand, the monitor still employs ASUS’ twisted 3-leg stand, complete with an LED projection of the ROG logo.

The ASUS ROG Swift PG32UQX will retail at US$3000 (~RM12308). At the time of writing, ASUS did not specify local availability or pricing.
at May 12, 2021
Email ThisBlogThis!Share to TwitterShare to FacebookShare to Pinterest
Labels: Asus, for, in, Launch, May, PG32UQX, Retail, ROG, Swift, to, US$3000, will