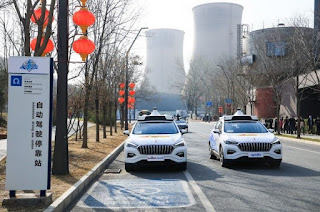 Chinese search giant Baidu launched what it claims to be a fully driverless e-hailing service in Beijing yesterday – the first of its kind in China.

The company said the Apollo Go Robotaxi service would be available in the capital’s Shougang Park – one of the venues of the 2022 Beijing Winter Olympics – where it’ll be ferrying visitors at the games. Apollo is Baidu’s AI-powered autonomous driving platform.

People can call for the robotaxi service by using the Apollo Go app. It has features like virtual reality navigation and remote car honking to help users locate the car. To unlock the car’s doors, users have to scan a QR code and health code on the vehicle for identity verification and COVID-19 prevention reasons.

Once they’re on board and the “Start the Journey” button is pressed, the system ensures that seat belts are fastened and doors are closed before beginning the trip. What happens in an emergency? Baidu said its 5G Remote Driving Service will be present at all times, allowing human operators to intervene if necessary.

The search giant said the robotaxi service was launched “only after conducting countless scalable driverless tests in many cities over a long period of time.” The company plans to introduce the service in more cities in the future, promoting it as a way of alleviating traffic congestion and helping China achieve its climate goals.

at May 12, 2021
Email ThisBlogThis!Share to TwitterShare to FacebookShare to Pinterest
Labels: Baidu, Beijing, Driverles, E-hailing, in, Introduces, Service