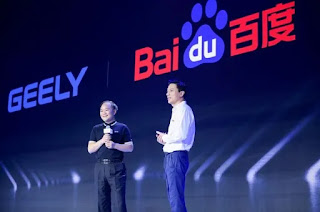 CEO Xia Yiping also told Reuters that the company’s first EV would look like a “robot” and would target young people, noting that Jidu would examine big market data before finalising the model. Previously, it was reported that the company would be working on an “intelligent” vehicle with autonomous driving technology.

“It will make you feel like it’s a robot that can communicate with you with emotions,” said Xia. As reported earlier, Jidu is looking to launch its first EV in three years, but its CEO said the company would also be trying for a shorter time frame.

According to him, the firm wants to introduce a new EV model every one or one-and-a-half years following its first launch. It also intends to bring aboard 2,500 to 3,000 new employees over two to three years, including 400 to 500 software engineers.

Tech companies inside and outside of China have been tripping over themselves to enter the booming EV market. Even Thailand is planning to sell only electric vehicles by the year 2035.

at May 02, 2021
Email ThisBlogThis!Share to TwitterShare to FacebookShare to Pinterest
Labels: and, Auto, Baidu, Developing, Geely, Into, Jidu, Pour, RM31.6Billion, SmartCars, to