Corsair Gives A Taste Of DDR5 RAM Running At 6400MHz; Has Nearly Double The Bandwidth Than DDR4 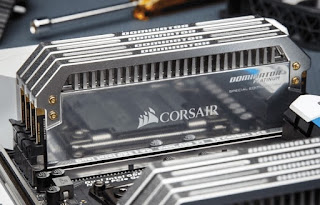 As the DDR4 memory standard begins to enter its sundown years, many of us are patiently awaiting the arrival of the next-generation DDR5 standard. And while there have been reports about the upcoming memory modules being made by Chinese brands, it appears Corsair has beaten them to the punch by giving the world a glimpse of the memory’s performance.
According to Corsair’s official blog post, its DDR5 memory modules were tested while running at considerably higher frequencies of 6400MHz. In addition to the higher speeds, its module also had a maximum bandwidth output of 51GB/s. For comparison’s sake, that’s nearly double the bandwidth output of your average DDR4 memory module, running at 3200MHz.

In addition to achieving nearly double the bandwidth, Corsair says that its DDR5 can achieve that while consuming less power at 1.1V. Further, and unlike DDR4, it is possible for the future memory standard to ship out with as much as 128GB in a single stick, versus 32GB for DDR4. 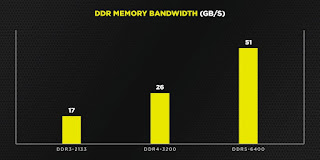 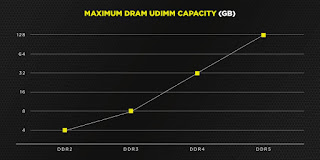 As to when we can expect DDR5, the answer is more or less the same as before; while there is no definitive launch date, the word is that we could see the new memory standard launch at the end of this year, at its earliest. Moreover, rumours are also suggesting that it could make its appearance alongside Intel’s own 12th generation Alder Lake-S desktop CPU lineup, which is also expected to make its debut within the same timeline.
at May 23, 2021
Email ThisBlogThis!Share to TwitterShare to FacebookShare to Pinterest
Labels: 6400MHz, A, At, bandwidth, Corsair, DDR4, DDR5Ram, Double, Gives, Has, Nearly, of, Running, Taste, Than, The