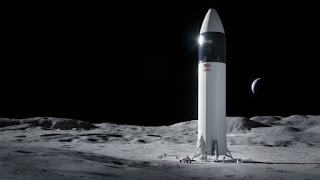 Jeff Bezos-owned rocket company Blue Origin has lodged a formal complaint against the NASA moon lander contract that was awarded to Elon Musk’s SpaceX, eliciting a mischievous reply from Musk himself on Twitter.

According to Reuters, Blue Origin told the federal Government Accountability Office (GAO) that NASA had moved the goalposts for contract bidders at the last minute. Earlier this month, the US space agency awarded SpaceX a US$2.89 billion (~RM11.9 billion) contract to build a moon lander to ferry the next two American astronauts to the moon.

Blue Origin and defense contractor Dynetics Inc were also bidders for the contract, but ultimately lost out to Musk’s company. In an emailed statement, Blue Origin said NASA’s “decision eliminates opportunities for competition, significantly narrows the supply base, and not only delays, but also endangers America’s return to the moon.”

In response to the complaint, Musk, a billionaire known for his maverick behaviour, tweeted apparently about Blue Origin’s… inability to perform. Adding insult to injury, he later shared an altered picture of Jeff Bezos and Blue Origin’s moon lander, Blue Moon – with the space craft’s name vandalised.

Ultimately, it seems that cost was a decisive factor in NASA’s selection. According to the New York Times, Blue Origin wants the space agency to award the contract to two companies as it previously said it wanted to do. But the US Congress only gave the agency US$850 million (~RM3.5 billion) for the current fiscal year – a mere quarter of what it requested for developing lunar landers.

at May 03, 2021
Email ThisBlogThis!Share to TwitterShare to FacebookShare to Pinterest
Labels: BlueOrigin, Challenges, Contract, ElonMusk, given, JeffBezos, Lander, Moon, NASA, SpaceX, to