realme Announces Watch S Master Edition; To Be Available On 8 May For RM429 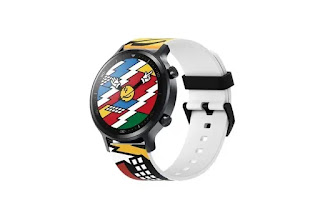 Over the weekend, realme Malaysia announced a wide range of products which it puts under its AIoT umbrella. Among them is the realme Watch S Master Edition.

Despite the name, the realme Watch S Master Edition is a special edition version of the base Watch S. You are paying a RM60 premium for the special look, but beyond that, it is effectively the very same smartwatch. So you can expect features like heart rate and blood oxygen monitoring, a well as Bluetooth 5.0 connectivity.

In addition to the special edition Watch S, realme Malaysia also announced the Watch 2. This comes with a 1.4-inch display, which has a 30Hz refresh rate. And it has a 315mAh battery, which the company claims can keep it alive for up to 12 days. It also has, as the company claims, 90 sports modes. And to better fit the outdoors, it has an IP68 rating. 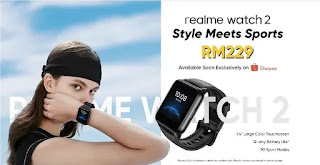 The realme Watch S Master Edition and Watch 2 are priced at RM429 and RM229, respectively. The former will be made available on 8 May, but the company did not say when it will be making the latter available.

In addition to these watches, realme Malaysia also announced the Buds Air 2 Neo, and the Buds Q2. Their prices are RM169 and RM129, respectively, with release dates of 5 May and 11 May. Adding to the list of products announced is the Cobble Bluetooth speaker and Motion Activated Night Light. Both are priced at RM99 and will be available on 5 May. 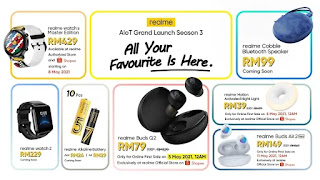 Keeping the strangest item for last, we have the realme alkaline batteries. These come in packs of 10, with AAA batteries costing RM24, and AA being priced at RM29. No availability dates for these yet.
at May 07, 2021
Email ThisBlogThis!Share to TwitterShare to FacebookShare to Pinterest
Labels: 8, Announces, Available, Be, Edition, for, Master, May, on, Realme, RM429, S, to, Watch