realme Narzo 30 To Launch In Malaysia On 18 May 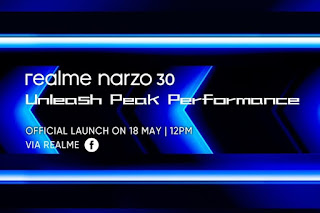 realme first announced the Narzo 30 Pro 6G and the Narzo 30A back in February. The latter has also made its way to Malaysia a month later. Now, it looks like the company is finally announcing the base model in the lineup. And it will be launching in Malaysia next week.

For now, realme Malaysia has revealed that the Narzo 30 will come with a MediaTek Helio G95 chipset. This is done via a post on its official Facebook page. Unfortunately, that’s all that the company is willing to reveal for the time being.

From the chipset, it’s probably safe to assume that the Narzo 30 sits in between the Narzo 30A and 30 Pro. But beyond that, other items on its spec sheet is still up in the air.

It’s also worth pointing out that the realme Narzo 30 will be launching in Malaysia before anywhere else. Which is interesting because new phones by the brand usually first launch in its largest market, India. Chances are this is a one-time thing with this model, but that remains to be seen.

As for the launch, realme Malaysia is set to have its launch event streamed on its Facebook page, as it usually does. This will take place on 18 May 2021, at 12PM.

at May 12, 2021
Email ThisBlogThis!Share to TwitterShare to FacebookShare to Pinterest
Labels: 18May, in, Launch, Malaysia, Narzo30, on, Realme, to