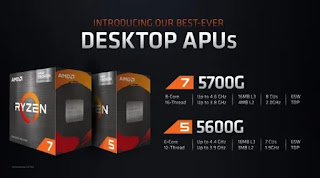 AMD’s Computex 2021 keynote kicked off with several key product announcements. Chief among them is the addition of two new Ryzen desktop APUs: the Ryzen 7 5700G and Ryzen 5 5600G.
Starting with the Ryzen 7 5700G, the CPU portion of the APU houses an 8-cores, 16-threads processor that features a base and boost clock of 3.8GHz and 4.6GHz. In addition, it has an L2 and L3 Cache of 4MB and 16MB respectively.

Naturally, because it’s an APU, the 5700G also comes equipped with integrated 8 Compute Units (CUs), Vega-powered Radeon cores, running at a boost clock of 2GHz.

Moving on, the 5600G is very clearly an APU aimed towards the mid-range market. Its CPU uses a 6-cores, 12-threads build, has a base and boost clock of 3.9GHz and 4.4GHz, respectively. As for its graphics cores, the Vega-based Radeon integrated GPU houses 7CUs running at a clockspeed of 1.9GHz. Oh, and it has a 3MB L2 and 16MB L3 Cache. 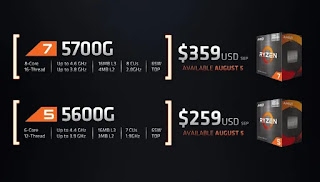