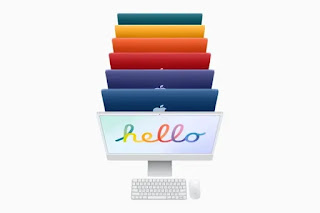 Following the arrival of the iPhone 12 and iPhone 12 mini with purple colourway as well as the M1-powered iPad Pro, here comes yet another new product from Apple’s Spring Loaded event into Malaysia. This time around, it is the all-new 2021 iMac which features not only an ultra-thin profile but is also equipped with the M1 chip.
As per previously released M1-based products, the variants available for the new iMac is generally based on the chip itself. For example, the M1 chip for the base model carries a 7-core GPU while the higher-end options come with 8-core GPU instead.

With a starting price of RM 5,599, the base model comes with 8GB unified memory, 256GB solid state drive, Magic Keyboard, and Magic Mouse. It doesn’t come with Gigabit Ethernet as standard though, so customers need to fork out an additional RM 110 if they want this feature for their iMac. 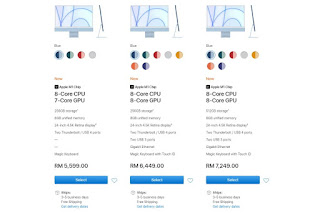 On another hand, the price of the iMac M1 with an 8-core GPU starts at RM 6,449 which also includes 8GB memory, 256GB SSD, and Magic Mouse just like the base model with a 7-core GPU. However, it does come with extra features including two additional USB 3 ports as well as Gigabit Ethernet support and Magic Keyboard with Touch ID as standard.

If you’re curious on how much an iMac M1 with full specs would cost in Malaysia, that would be RM 11,048. For that price, it covers 16GB of memory, 2TB SSD, Magic Mouse, Magic Trackpad, and Magic Keyboard with Touch ID & Numeric Keypad.

Given the availability of the new iMac M1 through Apple Malaysia’s online store, expect it to pop up at local Apple Authorised Resellers very soon in case you prefer to take a look at the actual machine first before committing to it
at June 10, 2021
Email ThisBlogThis!Share to TwitterShare to FacebookShare to Pinterest
Labels: Apple, for, FullBlown, Goes, imac, in, M1, Malaysia, Nowavailable, RM11048, Specs