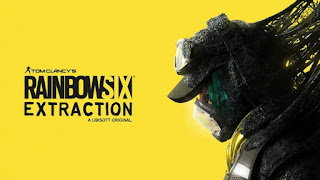 Following a couple of name changes, Ubisoft has finally revealed the next Rainbow Six: Extraction. It was previously known by names like the probably-inappropriate Quarantine, and then Parasite.
As part of the official reveal, Ubisoft also released a gameplay trailer that shows what Rainbow Six: Extraction will be about. From the looks of it, it is very easy to draw comparisons with Valve’s Left 4 Dead. One very noticeable similarity is the air-locked room that’s reminiscent of the latter’s safe room. This serves as a checkpoint of sorts, as operators go through three sub zones.

Rather than four characters who do generally the same thing, Rainbow Six: Extraction has up to three operators from Siege in a team. They seem to retain most of their abilities from that title too, for a more strategic approach. Stealth is also an effective strategy, at least at the early moments of each sub zone. Which is nice for players who don’t like to always run in guns blazing.

Since we mentioned operators, there will be a total of 18 to choose from, nine of which has been revealed. Rainbow Six: Extraction releases on 16 September on both console generations and on PC. As the icing on top, it also supports crossplay.