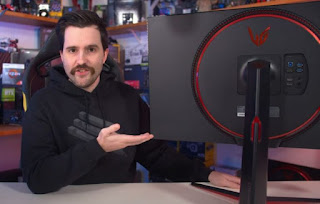 It is no secret that big names and major corporations that manufacture popular products, often try and get reviewers to publish reviews of said products in a favourable light, usually with the promise of monetary compensation. For LG, the Korean electronics giant found itself between a rock and a hard place when its attempt to bribe tech channel, HardwareUnboxed, went horribly wrong.

The whole showdown was made public when Tim Schiesser, one of HardwareUnboxed’s reviewers, posted a video about his engagement with LG recently. To summarise the video, Schiesser’s bane started when LG began dodging his questions about one of its gaming monitors. Shortly after, the brand then issued a “reviewer’s guideline”.

To be clear, brands issuing reviewer’s guidelines is nothing out of the ordinary. In this case, handing out such a document seemed a bit odd, given that the gaming monitor in question had been in Schiesser’s lab for some time now. The punchline of this conversation, however, was that LG blatantly tried its luck in attempting to get Schiesser to provide it with a “draft” of his review, and that he would be given compensation for his cooperation. Unsurprisingly, Schiesser said no.

This isn’t the first time HardwareUnboxed has taken to expressing its discontent against major brand names. Some of you may remember how the tech channel was initially struck by NVIDIA’s banhammer last year, due to issues pertaining to, yet again, the channel’s editorial direction. It wasn’t until two other major tech channels, LinusTechTips and JayzTwoCents, decided to step into the ring that NVIDIA decided to backpedal on its decision.

The good news is that, shortly after the video went live, Ken Hong, Head of Global Corporate Communications, LG Electronics, contacted Schiesser, hopefully to apologise for the kerfuffle and to inform him that the company will be implementing “significant changes” to how its monitor reviews will be handled in the future.

at June 20, 2021
Email ThisBlogThis!Share to TwitterShare to FacebookShare to Pinterest
Labels: Attempting, by, Called, EditorialDirection, for, LG, Manipulate, Out, TechChannel, to