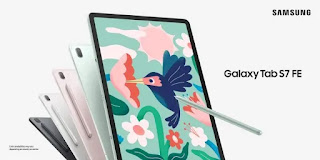 Samsung has officially announced the new FE variant for its Galaxy Tab S7 line-up earlier today – making it the brand’s first ever tablet to sport the “Fan Edition” moniker. As you may recall from our previous reports, numerous leaks regarding the device have circulated around the web in the past couple of months, revealing its design and specifications ahead of its global launch.
This variant sports a large 12.4-inch display with a resolution of 2,560 x 1,600 pixels. However, unlike the original model, it lacks a high refresh rate and features a TFT LCD panel instead of AMOLED. This is to be expected as most FE versions of Samsung’s products tend to lean towards affordability, while also offering performance that are at least on par with the original release.

Speaking of which, the Galaxy Tab S7 FE features a Qualcomm Snapdragon 750G, and comes with two different memory configurations. Specifically, you can choose between a 4GB RAM + 64GB storage option, or the slightly beefier 6GB RAM + 128GB storage model. As with most mobile devices, you can opt to expand its storage capacity up to 1TB via microSD. Samsung noted that all FE models come with Wi-Fi 5, Wi-Fi Direct and Bluetooth 5.0 connectivity, some configurations include LTE and 5G support as well. 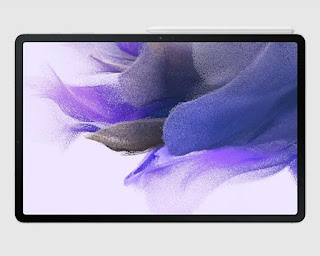 Powering the new tablet is a 10,090mAh battery, which is similar to the one offered on the Galaxy Tab S7 Plus variant. It also comes with fast charging support of up to 45W, but you’ll need to purchase the corresponding charger separately. That being said, a standard wall plug charger is still included in the box.

On the back of the FE variant is an 8MP main camera, while housed in the side bezel of its display is a 5MP selfie camera. Other features for the tablet includes dual AKG-tuned speakers with Dolby Atmos support, as well as compatibility with the included S Pen and also Samsung’s Book Cover Keyboard accessory. In terms of colour options, the new device will be available in Mystic Black, Mystic Silver, Mystic Green, and Mystic Pink.

Samsung has not revealed the pricing and availability of the new Galaxy Tab S7 Fan Edition at this time. The same can be said for its potential arrival in Malaysia – that is, if the tablet is planned for a release outside of the US and European regions.
at June 09, 2021
Email ThisBlogThis!Share to TwitterShare to FacebookShare to Pinterest
Labels: 10090mAh, 750G, and, Battery, FE, Features, Galaxy, Now, Official, S7, Samsung, Snapdragon, Tab