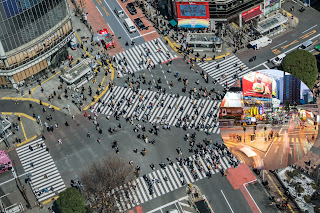 Come 19-June-2021, the Bukit Bintang area will bear a resemblance to the famous Shibuya station crossing. Kuala Lumpur City Hall (DBKL) has announced that they will be installing a “scramble pedestrian crossing” at the busy junction between Lot 10, Sungai Wang, and Wolo Hotel.To be accurate, the intersection is the one that connects Jalan Sultan Ismail and Jalan Bukit Bintang. The intersection has long been a high traffic pedestrian area that tourists and locals alike cross to get from Low Yat Plaza, Sungai Wang, or Timesquare to Pavilion, Lot 10, or Fahrenheit.DBKL believes that the scramble pedestrian crossing would help optimise walkability in the high traffic pedestrian area.They said that after extensive study, they came to the conclusion that the scramble crossing will make it easier for road users who pass through the road as well as reduce the risk of accidents.A scramble junction, or also known as an X-crossing, is a system that stops all vehicular traffic to allow pedestrians to cross an intersection in every direction, including diagonally, all at the same time.The most famous of these crossings is, of course, the one outside Shibuya station in Japan. Hundreds of people make use of the crossing every day. The crossing has become so famous that it pretty much became an obligatory stop for touristsAs we’ve mentioned, the new scramble crossing system is expected to go live at midnight on 19-June-2021.
at June 19, 2021
Email ThisBlogThis!Share to TwitterShare to FacebookShare to Pinterest
Labels: At, bukit bintang, crossingstyle, Shibuya