#BenderaPutih Movement Urges Those Who Require Assistance To Signal For Help 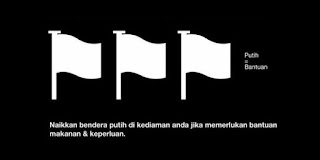 The #BenderaPutih (white flag) movement is currently making rounds among social media users in Malaysia and has brought a lot of attention to the plight of those who have been badly affected by the ongoing lockdown. While its origin is rather unclear, the idea by the movement is rather simple: by flying a white flag or cloth outside their homes, those who needed assistance in terms of food supply and daily necessities can be found by others in the area.
There have been growing reports indicated that many Malaysians are facing difficulties because of the near-total and indefinite closure of the economy due to the lockdown which would remain until daily COVID-19 cases drop to below the 4,000 mark. Supporters of the movement have emphasised that waving a white flag should not be interpreted in its traditional sense of indicating defeat or surrender, but to view it purely as a means to signal their need for support.

As its message spreads to more netizens, the #BenderaPutih hashtag is leading Twitter’s trending chart in Malaysia as of 3:22 PM today. The movement appears to be similar in nature to the #KitaJagaKita movement, which gained traction briefly at the start of the pandemic last year but later lost momentum after being co-opted by the government, seemingly in an attempt to absolve themselves from widespread criticism.

Since it began in March, the Ministry of Health has used the hashtag in tweets dozens of times, even though the hashtag was often used to criticise the government’s handling of the pandemic. The movement was also appropriated by Finance Minister Tengku Zafrul, Minister of International Trade and Industry Azmin Ali, and Housing and Local Government Minister Zuraida Kamaruddin, just to name a few. Even backbencher government MPs such as Ahmad Maslan frequently use the hashtag to praise the government.

Hanna Alkaf, who is credited for starting #KitaJagaKita, has rebuked politicians who try inserting themselves into the rakyat’s movement and expressed the same for #BenderaPutih as well. After all, Minister Zuraida is already trying to ride on the trending hashtag and naturally, this has immediately attracted criticism from the netizens.

at July 04, 2021
Email ThisBlogThis!Share to TwitterShare to FacebookShare to Pinterest
Labels: #BenderaPutih, Assistance, for, Help, Movement, Require, Signal, Those, to, Urges, WHO