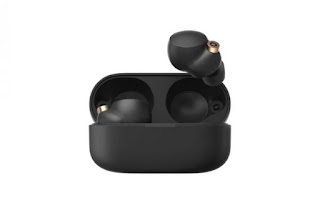 Sony has officially lifted the veil from the WF-1000XM4. As previously reported, the Japanese company officially launched the successor to the WF-1000XM3 that launched in 2019.
As per the official press statement, the WF-1000XM4 earbuds sport a new rounded, compact, and ergonomic design than before. Additionally, the earbuds feature Sony’s new V1 Integrated Processor that features a more advanced form of active noise cancellation. On top of that, the earbuds have a total of four noise sensor microphones; two on each earbud, tasked with hearing and analysing ambient noises.

As for the audio delivery, the WF-1000XM4 features what Sony a “newly designed” 6mm driver unit, along with a high compliance diaphragm to drive performance in low frequencies and enhance noise cancelling.

Like all Sony products, the WF-1000XM4 also supports Sony’s Hi-Res Audio Wireless and LDAC audio coding technology. On top of that, Sony has managed to cram in its DSEE Extreme audio upscaling technology into the earbuds. Oh, and it also supports the Speak-To-Chat feature, which pauses the music whenever they begin to speak or if an outside voice is detected.

On that note, it should come as no surprise that the WF-1000XM4 also supports Sony’s Adaptive Sound Control technology, enabling the earbuds to actively adjust the ambient noise levels, based on its surroundings.

The Sony WF-1000XM4 will be available from mid-July onwards and will retail at a recommended SRP of RM1099. Pre-orders for the earbuds are open starting today until 15 July. For those who choose to pre-order, do note that Sony will be bundling its earbuds with a Qi compatible wireless charging pad worth RM339, for as long as stocks last.

at July 04, 2021
Email ThisBlogThis!Share to TwitterShare to FacebookShare to Pinterest
Labels: Arrive, for, in, Malaysia, Mid-July, Retails, RM1099, Sony, to, WF-1000XM4