Trump Calls Bitcoin A Scam, Claims It Competes With The US Dollar 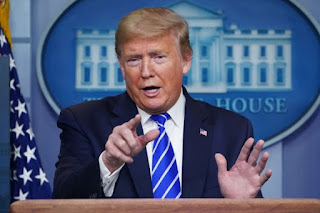 Former US President Donald Trump has described bitcoin as a “scam” and claimed that the cryptocurrency competes with the US dollar. Unsurprisingly, he said he wanted the dollar to be “the currency of the world”.
“Bitcoin, it just seems like a scam,” Trump said on Fox Business, according to the BBC. “I don’t like it because it’s another currency competing against the dollar.”

This isn’t the first time that the controversial “America First” politician has spoken against cryptocurrency. In 2019, back when he was US president, he slammed cryptocurrencies, including Facebook’s proposed digital coin Libra.

According to Reuters, he wrote on Twitter, “I am not a fan of Bitcoin and other Cryptocurrencies, which are not money, and whose value is highly volatile and based on thin air.” Trump, of course, is now banned from the social media platform due to his public support for insurrectionists who attacked the US Capitol on 6 January.

While his claim that bitcoin competes with the US dollar will certainly be disputed by experts, he’s not alone in carrying a dim view of cryptocurrencies. Bank of England Governor Andrew Bailey said cryptocurrencies “have no intrinsic value” and pointedly told potential investors to “buy them only if you’re prepared to lose all your money.”

Ironically, Trump’s archnemesis, China, has embarked on a massive clampdown on cryptocurrency even though the country is a major global hub for bitcoin mining. Furthermore, crypto-enthusiast Elon Musk’s Tesla pulled an awkward 180 on its decision to accept bitcoin as payment for its cars.

at July 04, 2021
Email ThisBlogThis!Share to TwitterShare to FacebookShare to Pinterest
Labels: A, Bitcoin, Calls, Claims, Competes, Dollar, it, Scam, The, Trump, US, With