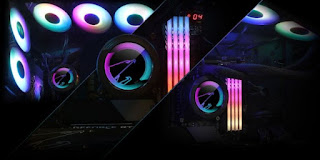 Specifically, the three new AIO coolers are the Waterforce 240, Waterforce 280, and Waterforce 360. As their names suggest, the three coolers come in sizes of 240mm, 280mm, and 360mm. Much like their X-branded counterparts, the radiators are thinner than the standard AORUS AIO cooler but comes with better heat dissipation technology. On that note, the radiators are also connected to a radiator pump with a 330° rotatable cap, via two tubes with a 7.8mm diameter that Gigabyte says will improve water flow within by 37%. And therefore improving overall cooling efficiency by durability.

Again, like the Waterforce X series, the waterblock is also fitted with an AORUS ARGB lighting display with intelligent detection that shows users the current CPU temperature via different colours. 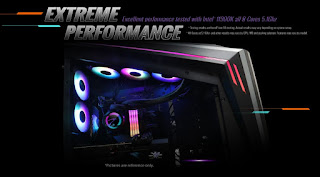 As for active cooling, each radiator model is equipped with either 120mm or 240mm fans, all of which are greased with Graphene Non lubricant ball-bearings that are designed to operate with ultra-low friction and noise. As a point of pride, Gigabyte says that its Waterforce 240 AIO cooler is able to effectively keep all the cores on Intel’s Core i9-11900K running at 5.1GHz ensuring that the accumulated never seemingly exceeds 81°C.
at August 31, 2021
Email ThisBlogThis!Share to TwitterShare to FacebookShare to Pinterest
Labels: AIO, AORUS, Cooler, Gigabyte, Launches, New, Series, Waterforce