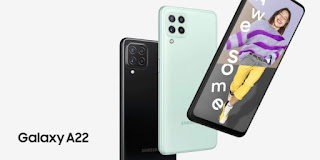 Just weeks after releasing the 5G variant in our market, Samsung’s official stores on two popular local e-commerce platforms have since listed the Galaxy A22 LTE. While they might share the same name, there are some noteworthy differences between the LTE and 5G variants of the phone.

For example, the Galaxy A22 LTE is running on MediaTek Helio G80 while the 5G model is equipped with a slightly more powerful MediaTek Dimensity 700 chip. The LTE model also has a slightly smaller 6.4-inch HD+ screen as compared to the 5G variant which has a 6.6-inch FHD+ display but the A22 LTE does feature a 90Hz Super AMOLED panel while the A22 5G comes with an LCD TFT panel. In Malaysia, both variants carry the same 128GB internal storage but memory-wise, the 5G has more RAM at 8GB while the LTE model is limited to 6GB. There is also a 48MP f/1.8 camera on both devices but the LTE model also offers optical image stabilisation which is something that is not available on the 5G model.

Even though both devices have a 2MP /f2.4 depth camera, the A22 LTE also has an 8MP ultra-wide camera and a dedicated 2MP macro camera while the A22 5G only has a 5MP ultra-wide camera. The 5G model also has a lower resolution 8MP selfie camera as opposed to the same camera on the LTE model which is equipped with a 16M sensor.

Regardless of your choice, both the A22 LTE and 5G come standard with a 5,000mAh battery alongside the support for 15W fast chargers. In terms of pricing, the Galaxy A22 LTE goes for RM899 which is RM100 less than the Galaxy A22 5G.

In conjunction with the phone’s release in Malaysia, Samsung will include a free soft case for each pre-order of Galaxy A22 LTE. Since the phone is not listed yet on Samsung Malaysia’s official website at the time this article was published, you may want to head on to Samsung’s official store on Lazada and Shopee instead.

at August 10, 2021
Email ThisBlogThis!Share to TwitterShare to FacebookShare to Pinterest
Labels: A22, At, Available, for, Galaxy, in, LTE, Malaysia, Now, Pre-order, RM899, Samsung