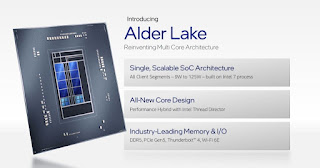 During its Architecture Day in August, Intel has promised that its 12th generation Alder Lake CPU lineup will launch this year, but fell short of providing a solid date for the event. Well, thanks to MSI, it appears that the date seems to be set for 4 November.

The alleged confirmation date stems from the Taiwanese PC components and laptop maker’s press release, announcing that it would be providing a free upgrade kit for Intel LGA1700 CPUs, along with their Coreliquid CPU coolers. More specifically, consumers will need to fill up a form in order to receive the upgrades but as of this publication, the button that would usually take them to the necessary portal is greyed out and sporting the words “Coming Soon”.

More to the point, the availability date of 4 November initially drew suspicions from Videocardz, whom after reaching out to what it says were reliable sources, was confident that the date is when Intel plans to launch its Alder Lake-S desktop CPU lineup. Further, that date reportedly coincides with the product’s sales and review embargo. 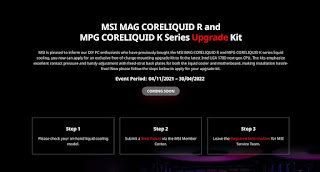 Intel is expected to launch three SKUs under the Alder Lake-S series, including the Core i9-12900K, Core i7-12700K, and Core i5-12600K. As it stands and given how these things usually go, Intel has yet to officially confirm anything, so take this news with a pinch of salt.
at September 28, 2021
Email ThisBlogThis!Share to TwitterShare to FacebookShare to Pinterest
Labels: Alder, Confirms, CPU, Date, Intel, Lake, Launch, Lineup, MSI, of, Seemingly