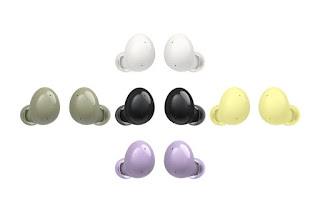 We saw press images of the Samsung Galaxy Buds2 getting leaked late last month. More details of the upcoming TWS buds have since been uncovered, but from a more official source, shall we say. The source in question this time is the plugin app, found on the company’s update server. If you think this sounds familiar, it’s because a similar thing happened before with the Galaxy Buds Pro.

According to XDA, the discovery was made by a developer called Tim Schneeberger. While we’ve seen some of these before, new details include the five colour options that the Samsung Galaxy Buds2 will come in. These are the standard black and white, as well as violet, green and yellow.

In terms of features, it appears that the Samsung Galaxy Buds2 will come with the ability to enable active noise cancelling in a single earbud. This suggests that it will indeed have ANC capabilities, contrary to previous reports that suggest that it stops at noise suppression. Though as Schneeberger notes, this may be tied to specific firmware versions. But compared to the Buds Pro, the upcoming TWS buds looks to lack the “high/low” options for it. Other bits of information include batteries, of which each bud is labeled as having 61mAh, and the case with 472mAh.

Naturally, the plugin app here is a pre-release version, so don’t be too surprised if things are different when the Samsung Galaxy Buds2 actually gets released. As for when that is happening, the upcoming August Unpacked event may be the earliest possibility.