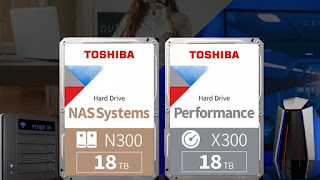 The new 18TB HDDs can be categorised into two SKUs: the X300 and N300. The X300 18TB model is, as the “X” prefix would suggest, designed for users with high-end desktops, while the N300 variant is designed for inexpensive network-attached storage (NAS) solutions.

As per Tom’s Hardware, the X300 HDDs are the only hard drives in the world to use the MAMR technology for the consumer desktop segment, while the N300 series HDDs are designed for NAS with up to eight bays. Oddly enough, Toshiba hasn’t fully let its hair down in regards to the drives’ performance, but what is known is that the hard drives run on a 7200 RPM-class helium-sealed platform. And offer up to 281MB/s in average sustained data transfer rate. 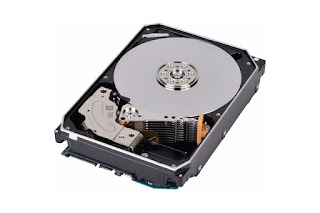 At the time of writing, Toshiba has yet to disclose the pricing for either the X300 or N300 18TB HDDs. However, it has said that the drives should be out sometime in the fourth quarter of this year.
at September 28, 2021
Email ThisBlogThis!Share to TwitterShare to FacebookShare to Pinterest
Labels: 18TBHDDs, Assisted, Desktops, for, Launches, Microwave-, NAS, Toshiba