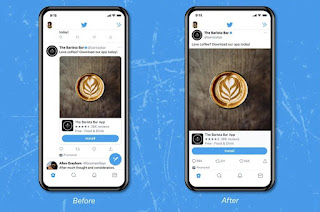 Twitter recently revealed that it is testing a new layout on its iOS app for tweets containing photos and videos. Posts such as these will now fill up the entire width of the screen to give more focus on media content shared by the platform’s community.

From the demonstration video provided, it is quite clear that Twitter has drawn inspiration for this new layout from social media rival Instagram. In fact, these posts do bear a strong resemblance to the Facebook-owned photo sharing platform’s layout – difference being the inclusion of Twitter’s familiar reply, retweet, like and share buttons below the images or videos, and the occasional text-only tweets scattered in between while scrolling through.

This test is the latest from the company as part of its efforts to address various complaints regarding its multimedia content supported tweets throughout the years. These include poor compression that drops the quality of uploaded photos, and the forced cropping of images (which also has controversies of its own) in order to fit within Twitter’s then-existing layout. Since then, the platform has been tweaking its interface to allow for full-sized images and adding high resolution content support up to 4K.

However, not all users are keen on this new edge-to-edge approach. According to The Verge, those who have access to the new layout have complained that it is too “in your face” for their liking and is also “headache-inducing”, while others have made inevitable comparisons of the new format with Twitter’s rivals – namely Facebook and Instagram.

If you’ve not noticed the new layout on the platform’s iOS app yet, that is because Twitter has only rolled out the update to a small number of testers at this time. So far, there’s no mention of when the platform is planning to have the updated interface to other users on Apple’s platform, or even to those on the Android version of the app.

at September 08, 2021
Email ThisBlogThis!Share to TwitterShare to FacebookShare to Pinterest
Labels: and, Edge-To-Edge, for, iOS, Layout, New, on, Photos, Testing, Twitter, Videos