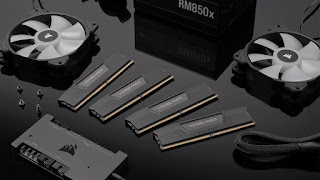 As the launch of Intel’s 12th generation Alder Lake CPU lineup edges closer, it’s about that time when the manufacturers of high-end components, chief among them being the memory makers. begin to give fans teasers of their next-generation products. In this case, memory and accessories maker Corsair is wasting no time on the matter and recently posted an image of Vengeance-themed DDR5 RAM.

Posted via Corsair’s official Twitter account, the image gives us a clear look at the memory’s heatsink design. In comparison, it doesn’t stray from the brand’s current design language for its DDR4 RAM, the only difference being that the DDR5 memory modules in the image aren’t fitted with an RGB strip in their spine. That said, it is likely that the company will offer variants of its next-generation memory with the multi-coloured LED aesthetic.

It is also worth noting that Corsair has also begun teasing the imminent arrival of its Dominator DDR5 series RAM on the product’s landing page, albeit simply being an outline of the module. On top of that, the brand has also started supplying engineering samples of DDR5 memory kits to reviewers.

As for their speeds, neither the tweet nor the images shares any details on that, but JEDEC specifications state that the new memory standard’s default speed should start at 4800MHz and run with 1.1V, across the board. Of course, how well Corsair’s new DDR5 RAM will handle overclocking will eventually boil down to several factors, such as whether or not the brand is using binned chips or a PMIC.

at October 06, 2021
Email ThisBlogThis!Share to TwitterShare to FacebookShare to Pinterest
Labels: Ahead, Alder, Corsair, DDR5, Intel, its, Lake, Launch, of, RAM, Struts, Vengeance