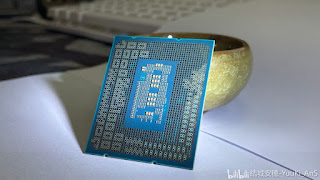 As the supposed November launch date for Intel’s 12th generation Alder Lake lineup looms over us, it’s only normal that the chipmaker’s rusty plumbing develop more leaks on the subject. To that end and thanks to the internet, there are now very detailed, close-up shots of what is believed to be an engineering sample of the Core i9-12900K.

Pictures of the 12900K were posted by prominent leakster Yuuki_AnS (@yuuki_ans) on the Chinese social media platform, Bilibili, as well as Twitter. The CPU bears the label “QX7H”, which is apparently the second revision of the flagship CPU. Needless to say, the close-up shots are gorgeous and filled with enough detail that we actually don’t have to squint. Of the entire album, the most detailed of the photos is the one that shows the CPU’s grid array.

On another note, the pictures also show offs the CPU’s longer shape and form factor, confirming Intel’s departure from its symmetrical CPU design. Moreover, the images also give us a look at the height of the 12900K, which earlier reports have said will be different from its current Rocket Lake lineup.

The changes in Alder Lake’s form factor also means that consumers may have no choice but to purchase a new cooling solution that fits the LGA1700 form factor or simply update the brackets on their currently existing coolers. Just like MSI or Noctua are doing.

Intel is expected to launch the Alder Lake desktop CPU lineup on 4 November.

at October 05, 2021
Email ThisBlogThis!Share to TwitterShare to FacebookShare to Pinterest
Labels: Camera, Core, Engineering, for, i9-12900K, Intel, Sample, Smiles, The