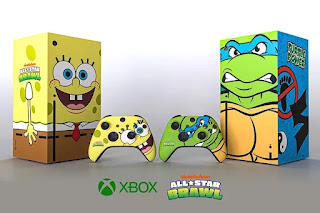 There have been plenty of special edition video game consoles over the years. Adding to that list, Microsoft has announced that it will be immortalising a couple of our favourite cartoon characters as upcoming special edition Xbox Series X consoles, namely Spongebob Squarepants and Leonardo from Teenage Mutant Ninja Turtles. 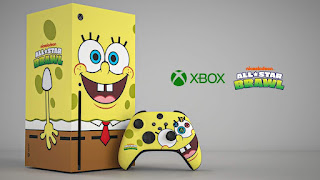 Gaze upon the sponge’s eyes when you push and prod them with your fingers on the controller, as he stares back at you from the console seemingly designed to fit hit pants. Leonardo’s Xbox console is, of course, outfitted with his favourite slice of pizza – pepperoni, with no anchovies. 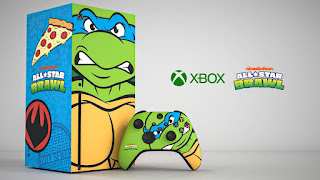 Unfortunately, these limited edition Xbox Series X consoles aren’t up for sale. Instead, Microsoft is offering them through an ongoing Xbox sweepstakes on Twitter. The contest will run until 24 October but to be eligible, you must be living in a country where Xbox Live is officially supported, which sadly rules out Malaysia.
at October 31, 2021
Email ThisBlogThis!Share to TwitterShare to FacebookShare to Pinterest
Labels: and, Consoles, Edition, Into, Made, SeriesX, Special, Spongebob, Squarepants, TMNT, Xbox