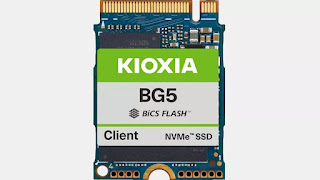 Kioxia recently launched its BG5 series of client SSDs. While the storage medium may seem nothing out of the ordinary, Kioxia claims that it is also the world’s smallest PCIe NVMe Gen4 SSD in the world.

Specifically, the BG5 series comes in the usual M.2 form factor, but instead of just a standard 2280 length, Kioxia’s new family of SSDs is also available the 2230 form factor. As mentioned, the SSD also uses the PCIe 4.0 interface, which is exceedingly rare among memory and storage makers. Further, the SSD uses Kioxia’s 112-layer BiCS5 3D NAND memory with a 1.2GT/s interface, and is available in three storage capacities: 256GB, 512GB, and 1TB.

In terms of performance, the BG5 PCIe 4.0 SSDs aren’t the fastest we’ve seen on the market, with maximum sequential read and write speeds of 3500MB/s and 2900MB/s, respectively, plus random read and write speeds of 500000 IOPS and 450000 IOPS. We’re guessing that’s the price Kioxia had to pay in order to cram in all the PCIe 4.0 related technology, into a form factor that is usually reserved for AX Wi-Fi modules. 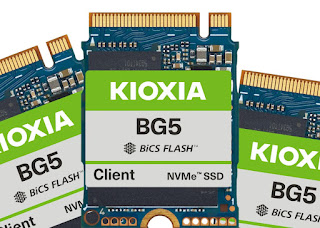 Speaking of downsides, it should be noted that the BG5 series SSDs do not come in the Ball Grid Array (BGA) form factor, meaning that any OEM or laptop maker who wishes to solder the storage modules onto their laptop PCBs are out of luck.

At the time of writing, Kioxia did not specify pricing or availability dates for the BG5 series, but it has stated it is currently sampling the product to several key industry players and customers.