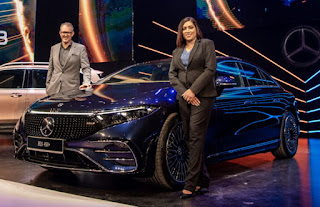 Unlike EQA which was generally derived from the ICE-based GLA, the EQS was conceived using a modular architecture that is designed exclusively for luxury and executive-class electric vehicles. In fact, EQS is the first model that is based on the EV-specific platform. 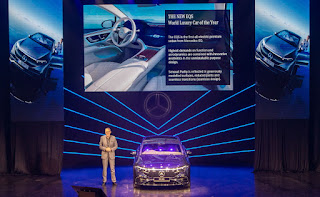 Globally, the fully-electric saloon can be obtained in several variants but in Malaysia, it is only available in the form of EQS 450+ for the time being. Fully imported (CBU) from Germany, this particular variant has a rear-wheel drive setup and features a 245kW motor that can deliver around 333hp of power and maximum torque of 565Nm of torque alongside a top speed of 210 km/h.

Equipped with a 107.8kWh battery which provides the car with enough juice to travel between 631 km to 782 km according to WLTP standard, the EQS 450+ supports AC charging of up to 11kW while it is also capable of supporting DC chargers with a power rating of up to 200kW. When it comes to charging time, the car takes around 10 hours to reach from 10% to 100% when charged using an 11kW AC charger. 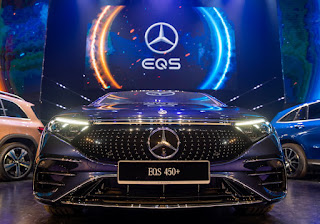 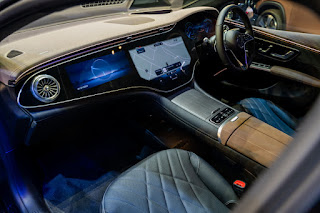 As you can tell from the third letter in its name, EQS models are on the same level as per Mercedes S-Class line-up. This means that the EQS 450+ is part of the company’s top-of-the-line releases which is why the luxury saloon is filled with plenty of features inside and outside.

For example, the Malaysian-spec EQS 450+ comes standard with AMG Line exterior and body styling alongside 21-inch light-alloy AMG wheels. There are plenty of other items that were optional extras in other markets but made standard for the release in Malaysia such as the rear axle steering, the curved tri-display MBUX Hyperscreen, MBUX Augmented Reality Navigation, head-up display, THERMOTRONIC automatic climate control, and 15-speakers 710 watts Burmester surround sound system.

Given how S-Class models are also commonly used as chauffeur vehicles, things are no different with the EQS 450+ too. Aside from the luxurious interior all around which has draped in Nappa leather, rear passengers of the new EV are provided with their own infotainment displays and there is another detachable tablet that they can pull out from the centre armrest.

Naturally, the EQS 450+ comes with an OTR price tag to match at RM698,888. Covered by a 4-year unlimited mileage warranty in addition to a separate EV battery-specific 10-years 250,000km warranty, delivery is taking place immediately.
at July 25, 2022
Email ThisBlogThis!Share to TwitterShare to FacebookShare to Pinterest
Labels: 450+, EQS, EV, for, Goes, in, Malaysia, Mercedes, Official, RM 699K