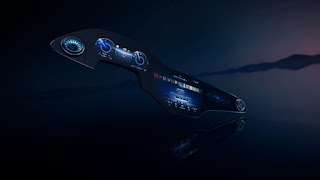 Cars are continuously evolving; traditional fuel-powered engines are gradually replaced by hybrid or full electric systems, and digital interfaces are now in place of the traditional analogue ones. In the latter’s case, Mercedes-Benz has recently showcased its latest MBUX (Mercedes-Benz User Experience) Hyperscreen, a massive 56-inch display for its upcoming EQS electric vehicle (EV).
Due to its size, the Hyperscreen will span nearly the entirety of the vehicle’s front cabin, functioning simultaneously as a HUD for the onboard instruments as well as an infotainment system. According to Mercedes, the display features an OLED panel, Gorilla Glass protection and also built-in camera and light sensor for adjusting its brightness automatically. Ensuring a smooth and responsive experience, powering the device is an unspecified eight-core CPU and 24GB of RAM. 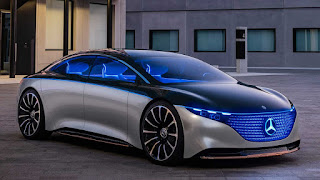 The car maker explains that the Hyperscreen’s MBUX system uses a so-called “zero layer” interface that eliminates the need of sub-menus. This is said to remove numerous operating steps, offering the driver with important applications in a situational and contextual way at the top level in view. Mercedes added that the display includes a total 12 actuators beneath it for haptic feedback during operation, giving the user a sense of responsiveness during interaction. 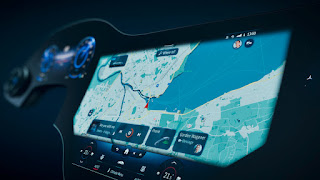 Feature-wise, the MBUX system on the Mercedes EQS comes with over 20 functions ranging from birthday reminders to the onboard active massage programme. These are further enhanced by an AI technology that is capable of identifying and adapting to certain situations as well as offering assistance to the driver – making personalised suggestions for numerous infotainment, comfort and vehicle functions.

On a related note, the car’s automated driving technology was revealed back in July 2020 to be a collaboration between Mercedes-Benz and NVIDIA. As previously reported, the latter will be providing sophisticated and advanced computing architectures in order to achieve Level 2 and 3 driving autonomy, as well as Level 4 parking autonomy.

As for the car itself, Mercedes suggests that the EQS is slated for a launch within this year. However, no expected release date has been provided at this time.