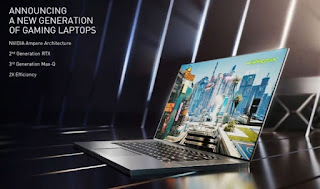 Aside from the revelation of its GeForce RTX 3060, NVIDIA’s CES 2021 keynote was also about the launch of its new laptops with GeForce RTX 30 series GPU and it didn’t disappoint. In total, the GPU brand announced three mobile variants of its 2nd generation mobile graphics solution.
At the very bottom of the list and quite obviously catering to entry-level gaming laptops is the RTX 3060 mobile. Based on NVIDIA’s presentation, gaming laptops fitted with this particular GPU are expected to deliver an average framerate of 90 fps or higher at Full HD resolutions. Price-wise, gaming laptop fitted with it will start at US$999 (~RM4050), and at the very least, we know that the Lenovo Legion Slim 7 is going to be one such model. 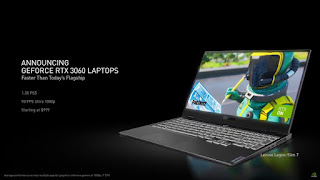 Moving up the line, there are the gaming laptops powered by the mobile version of the RTX 3070, and on that note, we also at least know that the ASUS ROG Zephyrus G15, the follow-up to last year’s wildly popular Zephyrus G14, is one model that will house the GPU. To that end, NVIDIA says that the discrete GPU will be better suited for laptops with displays running, at long last, 1440p resolution with refresh rates as high as 144Hz. In regards to pricing, laptops in this range are expected to start from US$1299 (~RM5267).

Last, and certainly not least on the list, are the top-tier laptops, powered by an aggressive, mobile variant of the RTX 3080. As per our initial reports, NVIDIA has confirmed that its new king-of-the-hill mobile GPU will indeed be running with 16GB GDDR6 memory, making it the fastest GPU in its class for gaming laptops. 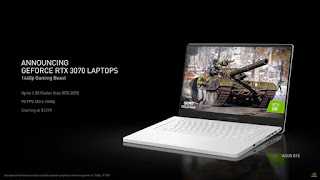 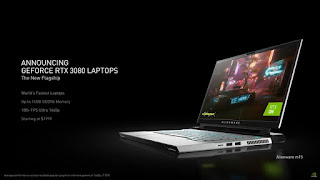 Like the laptops housing the RTX 3070, it appears that the majority of laptops running with the RTX 3080 will also be offering gamers options for displays with 1440p resolutions. With high refresh rates as well, although it wouldn’t surprise us if OEM partners will offer consumers 4K display as potential options too. Oh, and pricing for these laptops are expected to start at a premium US$1999 (~RM8105), which is to be expected. 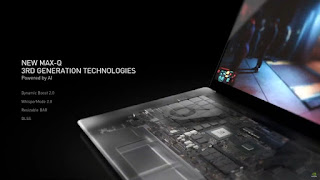 Regardless of the mobile GPU, NVIDIA also assured viewers that the new laptops and its corresponding GPUs will also support its Max-Q technology, which is already in its 3rd generation. This includes features such as Dynamic Boost 2.0, WhisperMode 2.0, improved support for DLSS, and access to Resizable BAR, which is similar to AMD’s Smart Access Memory (SAM) feature that was announced during the launch of its Radeon RX 6000 series graphics cards. But has been around long before that.
at January 13, 2021
Email ThisBlogThis!Share to TwitterShare to FacebookShare to Pinterest
Labels: Geforce RTX 30, Laptops, NVIDIA