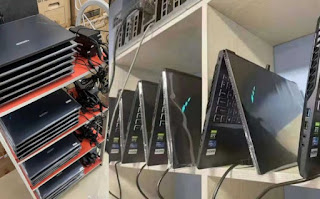 The recent rally and current value of both Bitcoin and Ethereum have clearly sparked renewed interest within the crypto mining community, as evidenced by one miner who unashamedly showed off his 100-card NVIDIA GeForce RTX 3080 mining rig. Now, in what can only be described as an act of desperation, Chinese GPU miners are turning their attention towards gaming laptops powered by NVIDIA’s GeForce RTX 30 series GPUs.
News of the RTX 30 series laptops being bulk bought was first reported on the Chinese social media platform, Weibo, with one BiliBili user by the name of “Fish Pond F2pool” showing just how lucrative mining Ethereum currently is with an Ampere-based GPU. It’s all in Chinese, obviously, but as a side note, she makes it clear in the video that she made the video purely out of fun and to give an example.

Getting back to the main point, the content creator shows a laptop equipped with an RTX 3060 set to mine Ethereum. The kicker here is that she’s plugged her laptop into a wall socket at a local Starbucks, and she’s sipping a cup of coffee while at it. For a period of two hours, the laptop’s RTX 3060 was able to mine 0.00053 ETH, which at current market rate, is around RM3.50. On a related note, that’s also supposedly how much her coffee cost.

Cryptomining with graphics cards has long been a popular method employed by miners. For the uninitiated, mining cryptocurrency requires a mining rig to complete a series of complex calculations or puzzles, known as “blocks”. How much a miner is paid depends on how fast his system can complete the puzzle. Simply put, the more cards in a mining rig, the more coins they get, as well as puzzles. 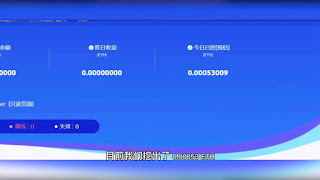 In contrast to trading, GPU mining doesn’t require any money to be put down. Well, aside from the initial cost of purchasing the graphics card needed for the task. Further, GPU miners, at this current moment, put up less resistance in mining Ethereum than an ASIC miner.

Nevertheless, the news of Chinese miners hoarding RTX 30 series gaming laptops en masse is not a good sign and only adds to ongoing GPU shortage. As it stands, both NVIDIA and its rival, AMD, have hinted at the graphics card drought stretching well into the year, and the worse part is that there is no end in sight.