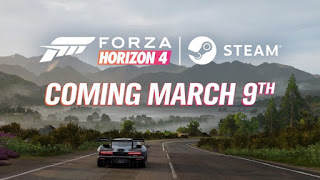 Forza Horizon was first released all the way back in 2018. But for its PC release, it was only available on the Microsoft Store. This will change next month, as the game will be making its way to Steam. And it’s almost  exactly one month away too, as it is set to be available on 10 March 2021.
The news came via the official Forza YouTube channel. According to the update post on Steam, Forza Horizon 4 will support crossplay with the Xbox consoles as well. You’ll also need an Xbox Live account to play, but an Xbox Live Gold subscription is not necessary.

Despite having a release date, there is no price yet for the Steam version of Forza Horizon 4 on the digital store. All you see is the wishlist button. So you’ll have to check back later if you want to find out. Or, if you really want to play the game, you can wishlist it after signing in so that you’ll be notified once the price is available.

at February 09, 2021
Email ThisBlogThis!Share to TwitterShare to FacebookShare to Pinterest
Labels: ForzaHorizon4, MakeItsWay, Steam, to