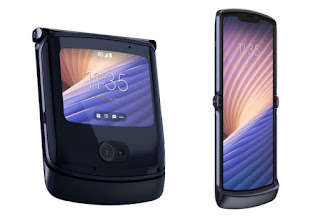 First launched in September 2020, the Motorola Razr 5G foldable phone has made its way to Malaysia and has been listed on the official stores of Motorola’s parent company, Lenovo. The model is the successor to the first modernised Razr that was released in early 2020 and the lineage of both models can be traced back to the original Razr V3 that was launched in 2004.
Just as a refresher for those who aren’t familiar with the second generation Razr foldable phone, it has a 6.2-inch foldable OLED panel as its main display alongside a 2.7-inch external screen that Motorola called Quick View display. Powered by Qualcomm Snapdragon 765G, the 5G-capable phone also features an 8GB RAM and 256GB internal storage but the phone does not come with expandable storage option though.

The Razr 5G also comes with a 48MP camera on its back as well as 20MP selfie camera as its photography tools. Completing its general specifications is a 2800mAh battery which sounds rather tiny for 2021 although it does support 15W fast chargers.

In terms of pricing, the Razr 5G can be obtained for RM 5,999 via Lenovo Malaysia’s official store on Lazada and Shopee. According to the listing on both stores, customers will also receive a free Lenovo M7 tablet and a leather case for their new foldable phone.