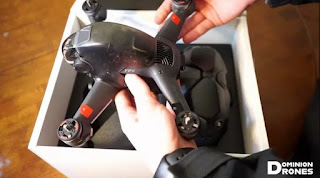 An unboxing video of the upcoming yet unannounced DJI drone, known simply as the FPV (an acronym for First Person View), has surfaced online. The video was originally shared by Dominion Drones, an authorised DJI store based in the US state of Virginia, but was pulled not long after due to unspecified (but obvious) reasons. An edited version of the video was later salvaged and uploaded on a different user’s channel, which can be viewed via this link.

This actually isn’t the first time the DJI FPV had been leaked, as images of a separate unboxing and hands-on with the drone was shared months prior by industry insider OsitaLV via Twitter. This new video basically corroborates with the former, confirming the upcoming quadcopter’s design, features and included accessories.

As seen from Dominion Drones’ video, contents of the package (believed to be the standard FPV combo) comprises the new quadcopter, a controller, goggles, charging brick, respective cables, and a power bank. The latter, as suggested by commenters, is meant to charge either or both the controller and goggles.

The drone itself features a small but unique looking design which includes a front main camera that only swivels vertically, as well as a set of front and downward-facing sensors. FPV drones are designed for racing instead of video recording, which explains the limited movement of its main camera. Covering the quadcopter’s upper chassis is a semi-translucent plastic shell, which can be replaced with a green solid coloured one that is included in the box. On its rear is a compartment that stores a removable rectangular battery.

Like recent iterations of DJI controllers, the one included with the FPV sports a gamepad-like design – complete with sculpted grips for each hand and trigger buttons in front. It also comes with detachable joysticks that can be stored in the inner side of each grip, and a flip-out wide antenna. Unlike the controllers included with most DJI aerial drones, this version does not include a mount for smartphones. 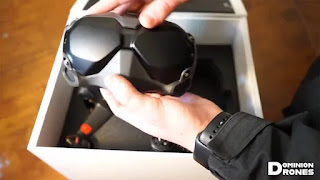 Meanwhile, the included goggles is an updated and lighter version of the company’s original that was originally introduced in 2019. It looks similar to its predecessor design-wise, complete with four detachable antennas that are located on each front corner of the goggles.

Specifications-wise, an alleged specs sheet of the drone provided by Twitter user Jasper Ellens suggests that the FPV quadcopter’s main camera comes with a 12MP 1/2.3-inch CMOS sensor with an ISO range of 100-3200. Its lens features a FOV of 150-degrees, f/2.86 aperture, and focus range of 0.6 meters to infinity. Despite being a racing drone, the FPV also comes with video capture capabilities in MP4/MOV format, specifically 4K resolution at 3840×2160 px at up to 60 fps and FHD at 1920 x 1080 px at up to 120 fps. 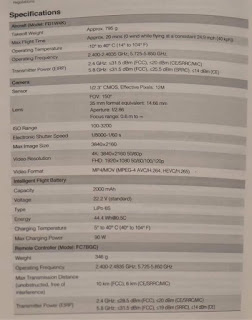 The sheet noted that the new DJI FPV also comes with a 2,000 mAh LiPo 6S battery with 90W max charging power, and is capable of approximately 20 minutes of flight time. Both the quadcopter and its controller support 2.4GHz and 5.8Ghz frequency bands, with a maximum transmission distance of 10km. Other than that, it is listed that the drone comes weighs approximately 795g. Details of the goggles, believed to be listed on another page of the specs sheet, were not provided by the Twitter user. It’s also worth noting that Jasper Ellens also uploaded a video featuring the drone (shown below) on his YouTube channel, briefly showcasing its startup sound.
As mentioned earlier, DJI has yet to officially announce the new drone. According to various sources, the DJI FPV is rumoured to launch sometime in March this year. Hopefully we can finally see whether these leaks are proven accurate when the time comes.
at February 15, 2021
Email ThisBlogThis!Share to TwitterShare to FacebookShare to Pinterest
Labels: DJIFPV, Leaks, NewVideos, Online, RacingDrone, Revealed, Specifications